Apple juice is delicious and refreshing, but sometimes you might find yourself buying far too much. That gallon jug seemed like such a good deal at the store, but you can only drink so much juice at one time. As you stare at the remaining 80% of the bottle, you may find yourself wondering, “can apple juice go bad?”

Like other fresh juices, if left too long, apple juice can go bad. The shelf life of the juice depends on the type of apple juice, as well as storage conditions. Fresh juice that has not been pasteurized can be stored for up to seven days in the refrigerator past the printed expiration date, whether or not it has been opened. You should always check fresh juice for signs of spoilage before consuming.

Juice that has been pasteurized will have a longer shelf life. Apple juice that is boxed or kept in a sealed bottle may be stored in a cool, dark place for around two to three months past the printed expiration date. Canned apple juice, or fruit juice concentrate will last for up to nine months, if unopened and stored in a cool, dark place like your pantry or the refrigerator.

Once opened, pasteurized juices should be stored in the refrigerator, and should be consumed within ten days. 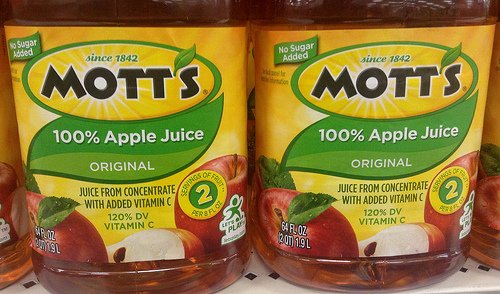 A change of color over time can also indicate that the apple juice is starting to ferment. If the juice becomes darker, you should definitely check for other signs of spoilage. Another visual indicator that apple juice has gone bad is mold growth. If there is any mold growing in the juice, it should not be consumed.

If the bottle becomes swollen or puffy, this is a clear sign that the juice has spoiled, and should be immediately discarded. Similarly, if the lid makes a popping noise when opened, as if gas is being released, the juice should not be consumed.

Because of the high sugar content, apple juice will actually freeze quite effectively. If you’re trying to extend the shelf life of apple juice that is in your refrigerator, you may want to freeze the juice into popsicle molds, for a quick treat. You could also freeze the juice in ice cube trays, later transferring the frozen cubes to an airtight container, for use in smoothies or to chill a drink without watering it down.

If you’d like to freeze juice in a large container for later consumption, be careful not to freeze the juice in the original container. The juice will expand a bit while freezing, and may explode if there isn’t sufficient space. Be sure to open the juice and drink at least a glass before freezing. To thaw the juice, pull out the frozen bottle and let sit overnight in your refrigerator. Frozen juice can be stored up to a year in the freezer, but should be consumed within a week once thawed.

Another way to re-use apple juice that’s in danger of going bad is to turn it into a syrup. Simply simmer the apple juice on the stove (with cinnamon, if you desire) until the juice has reduced by 75% and is a thick syrup. Use this delicious syrup to top ice cream or pancakes. Store in an airtight container in your refrigerator for up to three months.