If you’re reading this, you probably wonder if honey does expire or spoil, or how long does honey last. The good information for you is that this article will give you all the information about this sugary product you need.

How long does honey last?

When it comes to the shelf life of honey, you should know that it’s pretty much indefinite. That means that you can keep it for quite some years and it will still be fine. You should also be aware that the taste of honey might change a little over time. That’s perfectly natural, so as long as you’re fond of your honey’s taste, it’s fine to use it.

As I’ve mentioned, honey’s taste changes over time, but there are other factors that can contribute to this process as well. When you won’t store honey properly, it’s taste will change quicker and not necessarily in a good way. That’s why it’s important to keep it in the right environment. As a matter of fact, storing honey properly is very easy and most people do it the right way. You just need to store it in a cool and dark place. Pantry is probably one of the best places to keep your honey, just make sure that it’s in some kind of cupboard where no light can reach it. 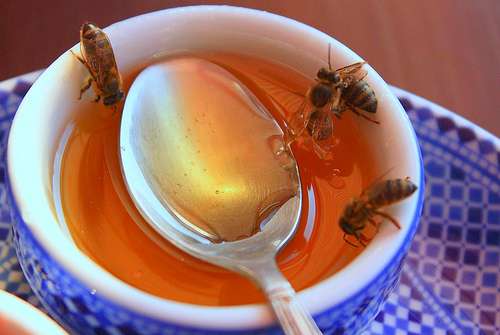 Another extremely important thing it that once you’ve opened the jar, you should always store it tightly closed. That seems obvious, but some people tend to forget about it. This way any contaminants won’t find their way into the jar. In fact, honey contains only a very small amount of water, so any kind of bacteria or yeasts can’t develop in that environment. But if you’ll keep the jar opened, honey will absorb some water from the air (it’s a very slow, but ongoing process) and after some time some yeasts might be able to live there and develop. They will (after quite some time) cause that honey will start to ferment. Let me just repeat what I’ve said: it’s a situation that happens extremely rarely and only when the jar isn’t closed all the time. If it’s closed, it won’t happen.

Does honey expire? How to tell if honey is bad?

As I’ve mentioned, honey doesn’t expire. Producers place an expiration date on every jar, but it’s rather an indication of how long contents of the jar should be of best quality. After that time honey might start to deteriorate a little faster, but it still will be edible, maybe not as tasty as a new one though. As I’ve mentioned, if honey is stored properly, it’s fine for a very long time and it won’t go bad. But when it’s stored very poorly (or the jar is damaged and it allows some contaminants to get inside), it’s possible that it’ll go bad. When you’ll notice that the color of honey has changed a lot, or it’s smell is very odd, discard it.

One more thing. As you probably know, honey crystallizes. That’s a perfectly natural thing and it occurs quicker to raw honey than to a commercial one. Crystallized honey isn’t bad, it’s as fine as a liquid one. To undo this process you can simply put the jar into warm water and start stirring as soon as you’ll notice that it starts to liquify. You can also scoop honey with a spoon, put it into a very small vessel and liquify only a tiny amount of it. Please remember that you shouldn’t heat honey many times, because it causes that it deteriorates quicker.

Summary
As you can see, the answer to the main question “can honey go bad?” is a pretty difficult one. If one stores it quite properly (so any contaminants won’t be able to get into the jar), it won’t go bad. But if it’s stored terribly, it might go bad after a long time. Honey doesn’t expire, though.