You bought that extra large box of raisins for your holiday baking needs, but months later, it’s still sitting in the back of your pantry. Can raisins go bad? Should you use it for the batch of cookies you planned to make tonight, or go and buy another box?

While drying fruit is a reliable preservation method, and raisins certainly have a much longer shelf life than grapes, raisins can still go bad. So long as the box of raisins is unopened, and stored in your pantry, raisins have a shelf life of a year past the expiration date. After this point, while the raisins may still be safe to eat, their quality will have greatly diminished.

Once opened, the shelf life of those raisins reduces to six months from the opening date. You can extend the shelf life of raisins by storing them in a tightly sealed container in your refrigerator, where they will remain good for up to a year. 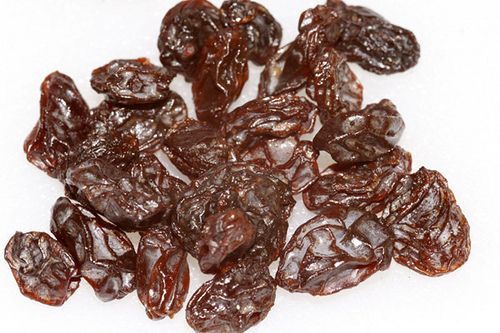 Whether you store them in your pantry, or in the fridge, be sure that the container is tightly sealed to regulate moisture and prevent mold growth.

You will notice over time that raisins stored in your pantry become less sticky, and will harden. When raisins are stored for a long time, and their moisture evaporates, they may become very hard, and may be difficult to chew. This doesn’t always indicate spoilage, but does indicate that the flavor has likely greatly reduced. The raisins are still safe at this point, and may be rehydrated by soaking in warm water for a few hours to use in cooking or baking. Try simmering in wine for a few minutes, turning off the heat, and covering for a half hour for an extra flavorful addition to your dish. Use soaked raisins immediately, as they do not store well.

Signs of spoilage with dried fruit are a little less obvious than with fresh fruit. Typically, smelling the raisins can provide the best indicator. If they smells at all sour or rotten, they have gone bad and should not be consumed. This is not very common, but you should definitely check for odor changes before consuming any dried fruit that has been stored for longer than six months.

Mold is another indication that raisins have gone bad. If there is any sign of mold growth anywhere on the fruit, it should be discarded. Mold will not typically grow on dried fruit, unless outside moisture has been introduced. This can also occur if the raisins are kept in an incredibly humid environment, and is part of the reason it is important to store raisins in a tightly sealed container!

While discoloration can sometimes indicate spoilage, it does not necessarily mean that the raisins have gone bad, yet. When raisins begin to discolor, if they haven’t spoiled yet, they are on their way. The flavor will be greatly reduced at this point.

Raisins can actually be frozen to extend their shelf life quite a bit. Because of their low moisture content, the texture of raisins does not actually change that much in the freezer. This makes freezing a great storage option, if you don’t regularly use raisins, and have the extra room.

To freeze raisins, spread them out on a baking sheet in a single layer, breaking up larger clumps as you go. This will keep them from clumping, and will make them easier to use. Freeze the tray for an hour, and then transfer the frozen raisins to an airtight container. Raisins will keep pretty much indefinitely in the freezer, though the quality may begin to degrade after about a year and a half. Thawing frozen raisins is simple, and can be done in either the refrigerator, or on your countertop, though it may not even be necessary to thaw the raisins if you’re going to bake or cook with them!