Got a half-open bottle of extra virgin olive oil that’s been unused for a few months, and wondering if it’s still any good? Does olive oil go bad?

Or maybe you’re just opening a fresh bottle and want to know how long olive oil lasts after opening.

If so, read on. This article is what we’re looking for.

This article focuses on extra virgin olive oil (EVOO). If your bottle doesn’t say “extra virgin” but instead calls itself “pure” or “light,” some of that oil is refined. If that’s the case, read my article on vegetable oil instead, as it’s more relevant to you. 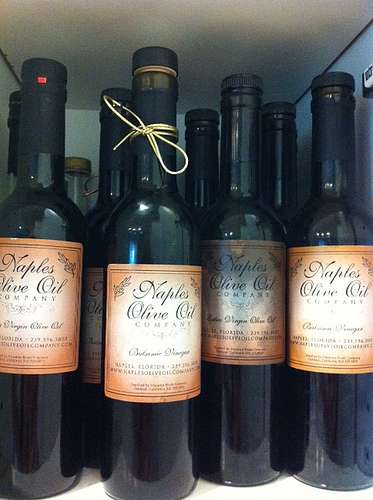 Olive oil goes rancid if stored for too long or in poor conditions. The main signs of rancidity are a sharp and bitter taste and sometimes an off aroma that might remind you of old paint or nail polish remover.

The issue is that fresh olive oil often tastes bitter and has a peppery aftertaste. And it’s quite difficult for an uneducated palate to tell if your olive oil tastes this way because it’s nice and fresh or because it’s already rancid.

(That’s why many of us are used to eating rancid olive oil, and we don’t really mind.)

Fortunately, eating a small amount of rancid oil isn’t a big deal in the short term. Otherwise, we’d all spend our evenings on the toilet after eating a healthy serving of EVOO in a salad.

That said, consuming rancid fats might have negative long-term consequences, especially if you do so quite often. That’s why it’s best to toss that bottle if you suspect it’s rancid.

But what if you’re not sure if the oil is rancid?

That’s when the date on the label comes in.

Olive oil doesn’t expire based on the date printed on the label, but unlike other oils, that date can help you determine whether you should still use it.

Long story short, if the oil is more than a couple of months past its date, it’s probably best to toss it if you care about the quality but can’t distinguish between rancid and fresh olive oil.

The standard is that the best-before date shouldn’t be more than two years from the bottling date. And that’s about as long as olive oil stored at room temperature can keep quality.

(We’ll talk more about the shelf life in a moment.)

So if your oil is already a few months past its date, chances are its quality is mediocre at best. Couple that with the fact that it’s probably rancid too, and tossing it seems like the best course of action.

Having that out of the way, let’s talk about the spoilage signs you should look out for.

How to Tell if Olive Oil Is Bad?

Discard your olive oil if:

Those are the typical spoilage signs of olive oil. If you notice anything else that seems off, trust your intuition and toss the oil. Better safe than sorry.

That said, there’s one thing that trips people up: cloudiness.

If you place your extra virgin olive oil in the fridge, it’ll become cloudy. That’s normal and nothing to worry about – it’ll get back to its usual consistency when you warm it up to room temperature.

(Similar thing happens to pretty much all popular oils, including canola, grapeseed, or sesame oil. Coconut oil is only slightly different, as it’s solid at room temperature, and refrigerating it will only make it firmer.)

How Long Does Olive Oil Last?

Unopened olive oil lasts about 15 to 24 months from the date it was bottled. Once you open the bottle, it retains best quality for about 3 to 5 months if you store it in a cool and dark place and keep the bottle sealed tightly at all times.

That period is already reflected in the best-before date and the exact time depends on the brand.

Some brands say olive oil keeps quality for only 12 to 15 months of crushing, while others go with more relaxed guidelines. And it’s not like one brand is right and the others are wrong.

Next, sometimes it takes a couple of months between harvest and pressing the oil, and the olives slowly lose quality during that period. That’s why premium olive oil brands often put a harvest date on the label and base their “best-before” date on that.

That’s all well and good and helps give consumers a slightly better estimate, but it’s far from ideal.

First, not all bottles come with a harvest date. Certainly not those budget olive oils most of us buy.

Second, olive oil in a single bottle is often a mix of a few harvests, making dates difficult to track.

Last, unless you’re an expert, you probably don’t care about any of that and just want a single date you know from other food products.

That’s why working with the best-before date is what I recommend.

Olive oil retains best quality for about 3 to 5 months after first opening the bottle. That’s true, assuming you store it in a dark-tinted bottle, seal it tightly after every use, and keep it in a cool and dark place.

Unfortunately, it’s difficult to tell exactly how long yours will last, as that depends heavily on both the quality and your storage practices.

Because of that, many brands simply say it keeps for a couple of months after opening. Fortunately, California Olive Oil Council gives a slightly more precise estimate of 3 to 6 months. And that’s what I suggest you stick with it.

Other oils tend to last a bit longer than olive oil. For instance, peanut oil keeps for at least six months after opening.

How to Store Olive Oil

Store your olive oil in a cool and dark place, away from sunlight and heat sources. And after first opening the bottle, keep it sealed when not in use.

There’s no need to refrigerate olive oil, but storing it in the fridge is worth considering if you’d like yours to retain quality for longer and don’t mind it becoming cloudy.

EVOO becomes a bit cloudy in the refrigerator, but it returns to normal if warmed to room temperature. Remember to do that if you’re going to use it to dress a salad.)

One thing is certain about where your EVOO bottle should sit: nowhere near the stove. That’s typically the warmest place in the kitchen, and heat is one of the factors that speed up the oil going rancid.

The two other factors are air and light.

Keeping olive oil away from light is simple – store it in a closed cupboard or anywhere else sunlight doesn’t reach.

When it comes to limiting air exposure, the most important thing is to keep the bottle sealed at all times. If you’re using any olive oil pourer, make sure it seals itself properly and doesn’t leave the bottle half-open.

Then, if you’ve bought an extra large bottle of expensive olive oil, consider transferring some to a smaller bottle you regularly use while keeping the rest sealed in its original bottle. And when that bottle becomes less than half-full, you transfer the oil to another, smaller bottle.

You get the idea – it’s all about having as little air in the bottle and opening it as rarely as possible.

Thanks for reading this primer on olive oil. Here are the takeaways: